This makes Ian the strongest landfalling hurricane to hit the continental US since Michael (2018). Hurricane Ian ranks in a tie for 4th strongest hurricane on record to make landfall in Florida with Charley (2004) and Florida Keys (1919).

Hurricane Ian is now strengthening in the warm, Gulf waters and is still expected to make landfall as a major hurricane along Florida’s Gulf Coast late Wednesday/early Thursday.

Preparations are being rushed to completion ahead of Hurricane Ian, but the latest forecast advisory suggests Ian landfall could be a bit farther south of Tampa.

The latest stats on Hurricane Ian

Ian emerged in the Gulf of Mexico Tuesday morning after making landfall in western Cuba as a category 3 hurricane. Ian will likely strengthening to become a category 4 storm, just ahead of landfall.

From there, Ian’s slow movement up the peninsula should weaken the storm gradually, but tropical storm conditions are likely for much of the Floridian Peninsula into at least early Friday.

Where is Ian going to go?

Ian is poised to make a landfall between Tampa Bay and Fort Myers along Florida’s west coast with landfall almost directly between Tampa and Fort Myers becoming a more favored location as opposed to Tampa proper. The southward trend in the forecast track means that Tampa may escape a direct impact from Ian, but the metro area will still experience hurricane conditions. If the track goes north towards Tampa, that would be the first time since 1921 that a major hurricane would make landfall in/around the Tampa Bay area. But again, as of now, the track looks to be a little further south than directly making landfall in Tampa.

Whenever we talk about a powerful hurricane that moves slowly, the amount of energy the storm puts out can cause it to wobble and not move in a straight line so the landfall location is still not locked until Wednesday morning.

Another major concern is an expected drop in forward speed. Ian’s impacts to Florida will start Wednesday morning and could last at least 24 hours in some spots as it slows down. One of the main reasons for this, is that as the hurricane moves more north it will run into dry air and slow the forward progression. This is major for Florida because they could be dealing with hurricane strength winds for 24-36 hours + a massive amount of rainfall.

There has been a notable trend toward the hurricane remaining more intact up through landfall, meaning Ian is likely to turn to the northeast and not move as slowly as previously anticipated. However, it should be emphasized that this track remains very uncertain, with a typical spread in the steering features leading to big speed and track differences down the line, not to mention the oblique angle of approach to Florida. 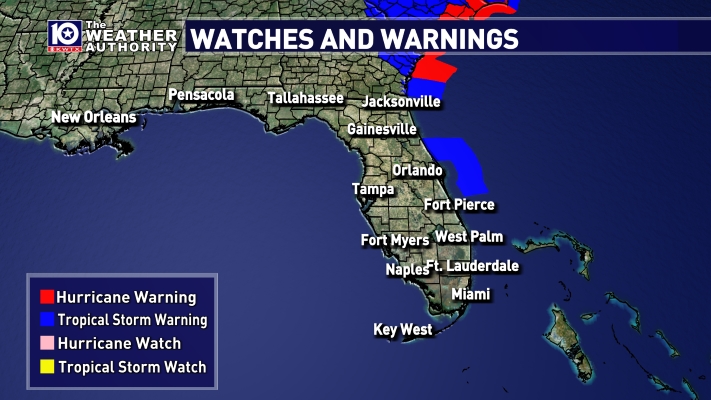 All of the Floridian Peninsula is now under at least a tropical storm Warning with Tampa to Fort Myers under a Hurricane Warning. A Hurricane Warning means that winds could peak around 85-130mph, there is a threat to life and property, massive storm surge, peak rainfall amounts between 18-24 inches, and the potential for tornadoes persists.

Heavy rain brings the most widespread impacts to Florida and eventually Georgia, and the Carolinas. Since Ian will bring feeder bands of rain up-and-down the Floridian Peninsula throughout the week, rainfall totals across the entire state (save for cities and towns west of Tallahassee) are expected to be between 4″ and 8″ with locally higher amounts possible, especially along the immediate coastline. From Tampa north and westward toward Florida’s Big Bend, rainfall totals could easily approach or exceed 10″ over the next 10 days. In fact, a bullseye of between 15″ and 24″ of rain could be centered very close to Tampa or St. Petersburg.

Much of Florida’s west coast is forecast to experience storm surge flooding. The biggest change comes around Tampa Bay and Charlotte Harbor. The expected storm surge has DROPPED for Tampa Bay to between 5 feet and 8 feet since Ian’s onshore winds are expected to be more focused around Cape Coral and Fort Myers. As a result, storm surge between Longboat Key and Bonita Beach, including Charlotte Harbor, has increased to between 8′ and 12′.

Storm surge is the sum of high tide and the expected swells from an approaching tropical system. The strong winds from tropical systems help to push water toward (or even away) from coastlines inundating many near-shore communities. A storm surge of 10 feet means that water is expected to be 10 feet higher than normal. 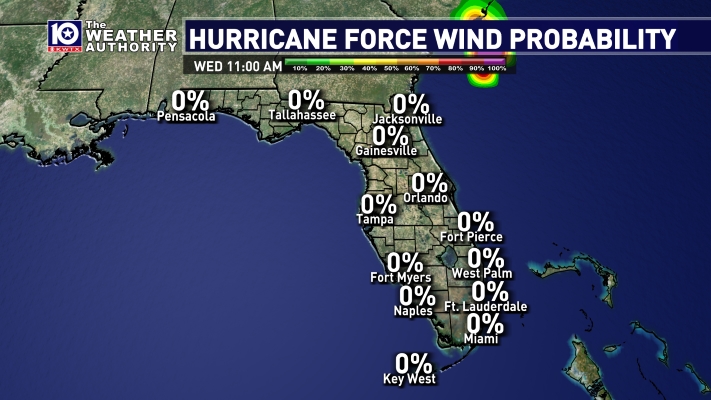 Ian is one of two systems in the basin 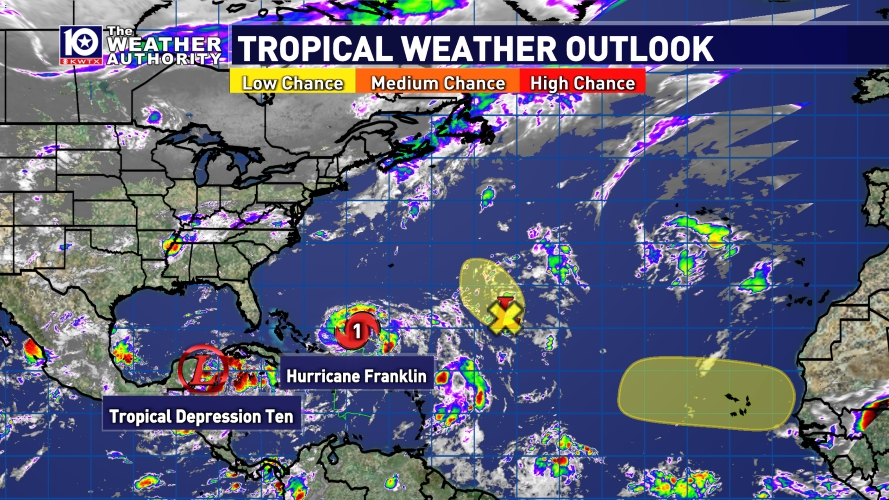 After seeing a big burst of tropical activity mid-September, conditions are starting to quiet across the Atlantic Basin. Former Tropical Storm Gaston has fizzled into a post-tropical storm and will be gone soon. Former Hurricane Fiona has been swept into the jet-stream and former Tropical Storm Hermine along Africa’s west coast has also dissipated. One other wave is a few hundred miles west of the Cabo Verde Islands and has a high chance of turning into a tropical storm over the next five days.

We’re entering into cold front season. So long as we get a decent frequency of cold fronts, the fronts will help to push tropical storms and hurricanes away.

Two children killed in chain-reaction collision on I-35; several others hospitalized

Find the coats by tonight

“Consistency? What’s that?” says the weather

Warmer for Tuesday ahead of next front